Articles Tagged ‘is not is’ 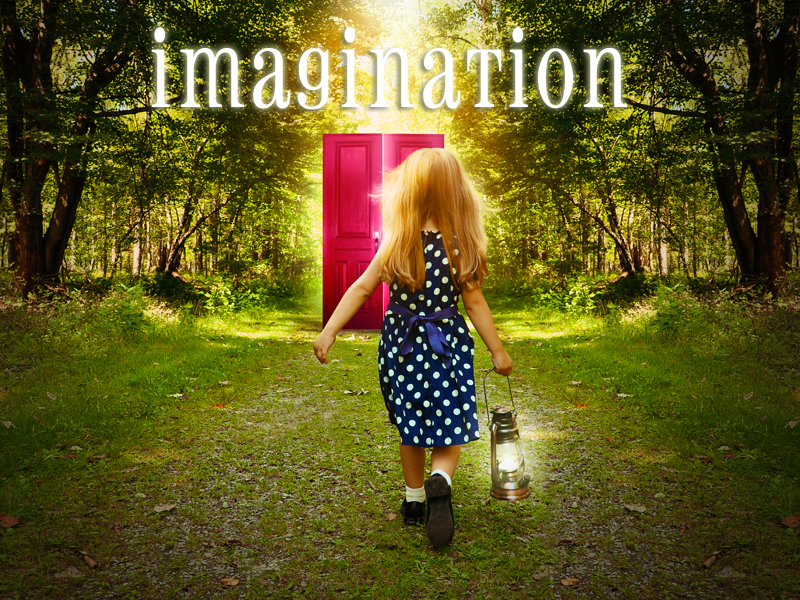 Have you ever stepped into a doorway and felt you've walked through a threshhold of time and space? Have you ever felt that your nose was an antennae for other dimensions and realms, and that you could easily turn your head and sense (scents) whether you've shifted into another one of these spaces? Have you found yourself doing something 'mundane' like driving to the grocer, walking the dog, and wondered how you got back home because your mind was elsewhere and you were so engrossed in that other space within your mind, that you have a vague recollection of driving or walking home?

Space and time exist to support a structuring (left brain, logical (masculine - to remain consistent with this website's theme), in order to allow for infinite creative possibilities (right brain, unstructured, creative (feminine). When we can keep the left brain/structure flexible and passive to what the outcome will be of the creation our potential streams forth in a great wealth of abundance. Our job here in this site is to help you balance your hemispheres to become whole minded.

Looking at an ordinary chair, one could define the chair by its shape and design, right?  Well, we believe otherwise.  We understand that the space around the chair - defines the chair.

If you can imagine expanding that point or thin line between the two (the chair and the space around the chair) you can expand your awareness into the Is Not Is.

Expanding the space between things will help you see a much bigger picture, a grander scheme is afoot.  Your ability to expand your awareness into those cracks and crevasses will assist you in seeing the rich diversity of the multiple realities surrounding us.
— Deidre Madsen

You have the sight now Neo, you are looking at the world without time. — The Oracle in The Matrix

On one hand these concepts appear elusive and abstract; however, if you take a closer look at your surroundings you will begin to understand there is truly an aliveness or life to the spaces between things. Portals, doorways, things of that nature are visible and easy to grasp, more so than the above concept perhaps. One thing is for certain, there is more than meets the conscious eye when examining our 'reality.' This is why I originally chose Jonathan Earl Bowser's "Invariance & Enlightenment" oil painting as my site's original theme, along with my lightning-infused logo. To understand further why I chose this oil painting please continue reading below. 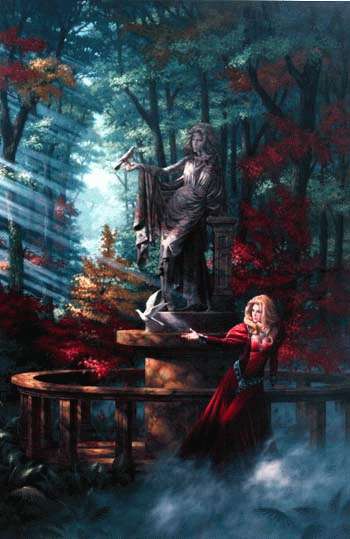 This website continues to expand as I grow and expand on in my own ascension. I honor the walk of all on their path and am happy to share my love for the sacred lands, and experiences with you in order that you may benefit along your own way.

When I discovered the beautiful oil painting, a powerful, strong chord was struck within. I heard, "This is YOU, Deidre!" I was spellbound by the magical oil. The deep and mysterious colors drew me into them and there I stood aside and within the goddess, aside and within the statue.

A few months later I received further confirmation; and see with more clarity - my gift of sight has grown exponentially. Oftentimes deep, intense trauma becomes a vehicle for soul growth after (order out of chaos) - and all this occurred right after my house of cards came 'a tumblin' down.

Aside from philosophizing, this oil painting holds mystery and hope with its mists and sun's rays and the far off in the distance light source showing us there is a way out of the magical grove. Do you really wanna go? Hmmm. I like it there... amidst the thick ferns and mist, the bending, mothering tree friends. I feel I will be in that place one day, maybe when I cross over, or visit paying special homage for its role in my life.

When the rays of enlightenment first fell upon ancient Greece - the intellectual foundation of western civilization - a path was shown from the shadows of ignorance and superstition. But those shadows returned to eclipse that fragile light, leaving only a hidden legacy of knowledge. Europe slept for centuries before this classical treasure was rediscovered.

The medieval era was a time when Europe mostly forgot how to remember what it had learned before. Fortunately, that intellectual heritage was preserved by Muslim scholars who never lost their profound admiration for the great minds of classical antiquity; the ancient books, after a thousand-year journey through the Islamic world, eventually found their way again into European hands. In the ages that followed - Renaissance, Reformation, and the Age of Reason (or Enlightenment) - those ancient descriptions of science and philosophy slowly evolved into an idea more powerful than monarchs or nations: modern liberalism.

In three paroxysms of reform, the social revolutions in Britain, France, and America (symbolized here by the red, blue, and white gown - echoing the coloration of the flags of these three nations), released political, scientific, and, eventually, social liberty (the dove) into the light. And yet, even though this liberty has given the West unprecedented freedom and prosperity, genuine enlightenment remains elusive. We yet long for the wisdom that so inscrutably escapes us, and are neither satisfied nor content. Why not?

As the enlightenment (the philosophy that human endeavor should be subject only to a guiding principle of logic and reason, and not to any irrational superstition) continues to drive society’s evolution, we grow increasingly overwhelmed by the bewildering complexities of a perpetually changing world. 20th century modernism has created a society that depends for its existence upon hyper-accelerated growth and development - the commercial imperative of relentless material acquisition. We are instructed - from cradle to grave, in ways obvious and covert - that we can never have enough of our own product and so must possess the newest incarnation of every conceivable object and experience. This is the lure - and snare - of modernity. But perhaps we sometimes seek the safe and simple comfort of things known and familiar, like the woman (a manifestation, or angel, of civilization) who is leaning to the right upon the stable edifice of history. Even while she reaches for the liberalizing light of the left, she rests upon conservative tradition and the past.

This painting depicts what we all hope is the endeavor of civilization: the human quest for wisdom.   It seems that whether we design our social and political structures to the ethereal and subjective left or the material and objective right makes no difference. Societies can be dynamic, constantly redefining themselves in the pursuit of some idealistically defined objective, or static, relying on the well-established precedence of history. Either way, people don’t change much: we feel joy and misery, hope and despair, just as people did 500 - or 5000 - years ago. It is, apparently, easier to reinvent society, than ourselves.

In Raphael’s great painting, The School of Athens, we see a timeless illustration of the problem.   Plato, full of idealistic fervor, gestures heavenward: “The proper aim of all thought is upon the eternal forms of divine mind!” The pragmatic, moderating hand of Aristotle, however, gestures toward the earth: “The proper aim of all action is the here and now.” Idealists, like the cleansing forest fire, clear away the corruption and decay of old growth; but builders, like all new growth, are always fixed upon the practical matters of immediate need. How can either way be the only path? It seems the debate - Plato’s hand or Aristotle’s - will remain with us for some great time

Until individuals, and not just the society around them, change in some fundamental, perhaps biological, way, the realization of our aspirations will never be found in this or that administrative mechanism. Some believe in strength and fear the failure of weakness; some believe in compassion and fear the failure of cruelty. But every child understands that two parents, providing both strength and compassion, provide the greatest benefit. And so, we shall always be in moving shadows and lost in our own vacillating ignorance (the mist), until we abandon the comfortable security of invariance and venture alone through the forbidding labyrinth of the forest darkness - our own unknown and unrealized potential. Enlightenment is not found left or right, but at a distant place, through and beyond the wilderness...

For those of you diehards reading down the page this far and curious about checking us out in the Wayback Machine, I developed 'tween in 1999 during development of a friend's poetry website "Horse of the Sun."  In that process I realized I too needed/wanted an outlet for something inside of me... but what?!  In the days that followed while in meditation suddenly everything clicked into place. I also remembered a book I read when I was a young teen called "Twink" which at the time propelled me into Twink's secret world. What has this to do with 'tween? Sound similarities brought familiarity and fondness, and... Twink lived in the world be'tween for she was sensory handicapped. Her world was similar to Helen Keller's and at the time I was deeply moved by Helen's story and film.

So the name for the original website was born: 'tween. It remained lower case letters from being taken from the word between. 'tween is the place where Twink and Helen Keller live, and from where we can all benefit. 'tween is the magical spaces, the inter dimensional places, and the point at which masks are ripped away. My site continues to guide you, Dear Reader, to... go BE'tween and be BE'tween.

May your ascension path be forever abundantly blessed with the Art of Healing in Light and Love.